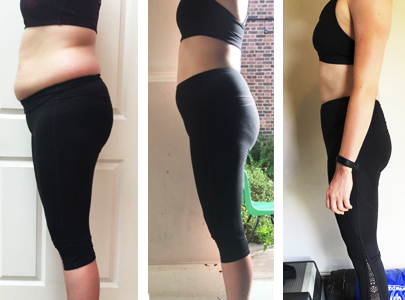 In the summer of 2017 I had the pleasure of meeting Becky.  A teacher in a west London school who was getting married the following summer. She had never really picked up a weight and didn’t really have any experience with training or nutrition, like most people she had done the odd fad diet and tried to use cardio as a means to burn off some excess calories. She consumed poor food and alcohol during the weekends and also thought carbs were the enemy.

A little background on Becky;  The high school she works at wouldn’t be the best to say the least, she would travel to a fairly run down area of west London and with a very demanding job, both mentally and physically.   This led her to a lot of comfort eating. Becky would always work over and beyond what is expected of a teacher, she has a heart of gold and she’d put her students and the school before herself.  This would lead to long hours, late nights and overall less time to herself.  Her fiancée at the time studied away, so when he was home at the weekends it would be their time to relax, enjoy each others company and see friends and family (Irish roots) which would lead to a lot of drinking and generally having a good time.   Something that she was adamant she didn’t want to lose out on.

With her job and her social life she could only commit to one session a week with me.   Which we would focus on strength training and she would also attend a circuit class run locally where that would act as her cardio session.

The main challenge was to get her set up on the right nutritional path, with her being an advocate of the no carb rule the first few weeks, (she’ll say months), was a challenge. Getting her protein up and getting her to hit the right amount of calories was the biggest hurdle. Initially I gave her a calorie and a protein target to hit, that was the first step, within that she could eat carbs when she wanted and any source she wanted, it didn’t matter as long as she kept within her calorie target and hit her protein.

Becky’s saving grace . . . . . chicken sausages! She loves them and has made eating in the morning bearable. Before, she could of skipped breakfast, but with her job that meant she was going too long without food and would lead to binge eating in the afternoon. By getting fairly low calorie and high protein food in early, this allowed her to save calories for later in the day and was something that really worked well for her!

I based her caloric intake on her training twice a week, sometimes she may of done more, and even roped a few of the other teachers in to a couple of sessions in the school gym or they’d go out in the park, all the extra was great but never more than three sessions a week. I also asked her to work on getting her NEAT up, but we didn’t track steps or anything, was just to allow Becky to be aware of moving more, things like taking the stairs at any opportunity, parking a bit further away from places and just small adjustments that would bring that up a touch.

We had to be sensible during the week so she could let her hair down a little at the weekend and still have that social time she needed and wanted!

She was under the impression that she would have to really starve herself but she didn’t, and in fact made so many comments on how much food she was consuming, this was really down to the higher volume foods she was eating as they were keeping her fuller for longer and she was avoiding the binge eating!

Now don’t get me wrong, we had some off days, for me as a trainer or coach its not just the hour we are in the gym training, its about managing the person, its a journey I like to take together and one like this needs constant support. We would always be in contact when needed, even when she has a melt down because she had a bad day at work and devoured a large bag of M&M’s, some people just need to be told its ok, we’ve also had the odd tantrum during training (literally stamped her feet at one point, I kid you not) and at times I’ve had to take it easy and manage the situation with the dreaded cycle that would always seem to start on training days.

With a journey like this, one of the biggest factors is time, Becky had a goal, she wanted to be a size 12 and 80kg on her wedding day and she gave herself enough time to do it the right way. Too many people try to do too much in such a short space of time, to drop 3 or 4 dress sizes or 10kg in the right way takes a bit of time, it takes consistency, its take planning and it takes dedication. But what time allows you to do, is still have a social life, still have alcohol, still party, go on hen do’s, birthday parties, family holidays, all these things can still be factored in if you allow yourself enough time and you understand how the body works.

When she came to me first, Becky weighed just over 90kg, she was sitting around a size 16/18, was over 36% body fat and holding the best part of 33kg of fat on her body, she was happy and bubbly as always but she wasn’t happy with her body shape. I only gave her the tools and knowledge to make a difference, she did all the hard work, she listened to my advice and took on board what I was trying to promote and fully brought in to my philosophy,. She didn’t cut carbs, in fact at times we upped her carbs and brought her protein in a little, she didn’t cut alcohol (trust me she didn’t cut alcohol) I didn’t give her a meal plan, or tell her what to eat! She had set macros and calories to hit during the week and she had to factor in alcohol at the weekends, the only thing I was strict about was making a point of swapping out her standard Sunday hangover McDonalds breakfast and an afternoon pizza and made her bring food into the house ready to make a full English and maybe a roast dinner or BBQ or something like that in the afternoon, depending if she was able to move or not, usually chicken sausages and eggs was the go to meal.

Becky headed in to her wedding weighing 71kg and sitting between a 10/12 dress size, we easily hit her original goals, she lost over 18kg in weight, she lost 12% body fat meaning she has lost just over 15kg of fat from her body and lost very little muscle mass in comparison. Apart form the body composition, what’s so pleasing to see is that her energy levels are high, her motivation is fantastic, and she now loves training, she has got all the knowledge now to keep herself in any condition she wants, I have witnessed her confidence grow, seen her develop as a person and the comments she now gets from people really do make her feel good about herself.

Every journey will be a challenge, both for my clients and me! We have had tears, we’ve had tantrums, plenty of highs and lows, nothing is plain sailing in life, but Becky shows more than most that if you put your mind to something, listen to the advice, buy in to a sound scientific physiology, be committed to that and not jump on some fad diet craze, then you really can change your body composition, without the sacrifices that so many people think you need.