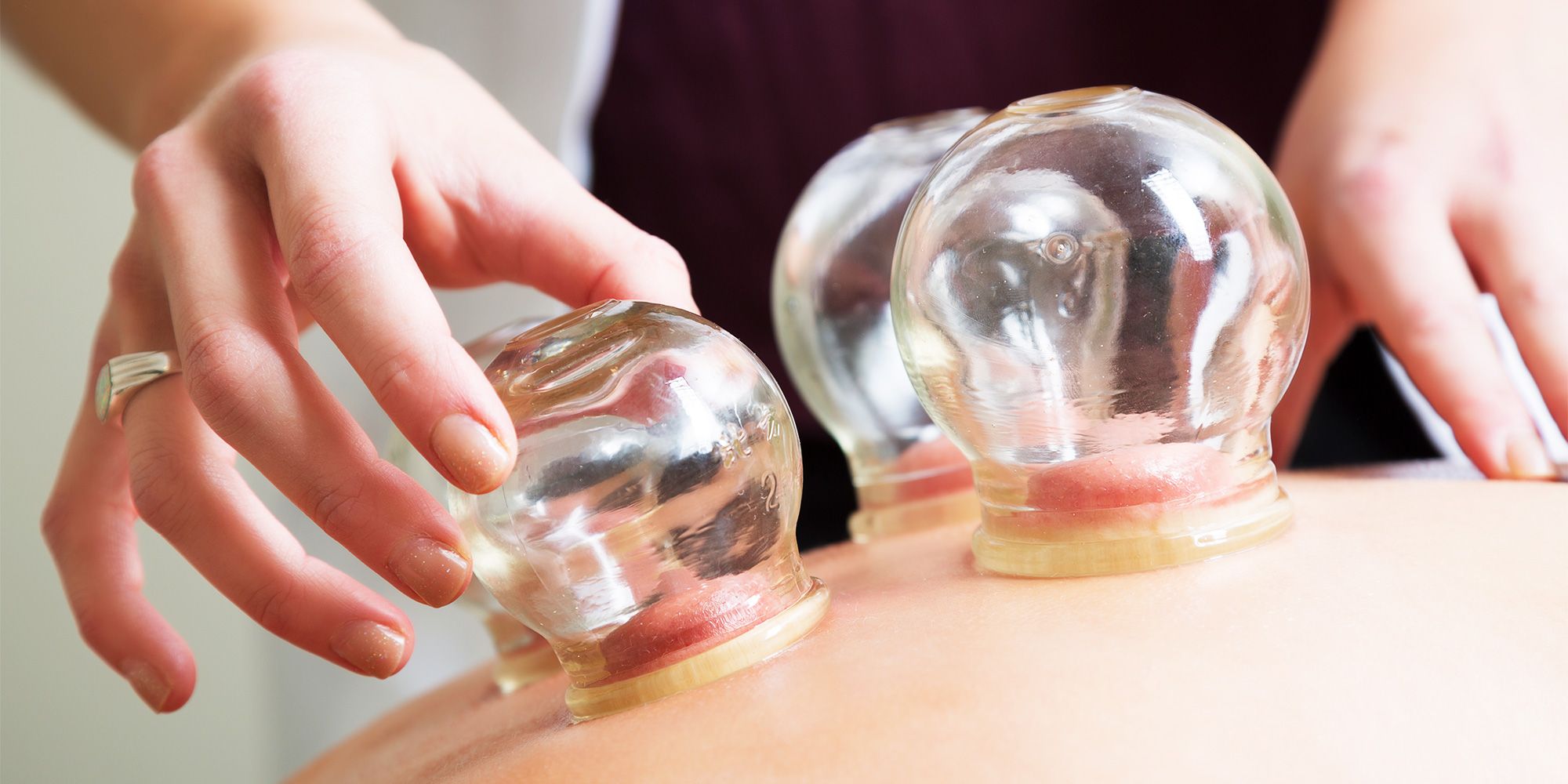 Yeah not that type!! go get your mind out the gutter.

This an alternative medicine scheme that involves placing suction cups on the skin. Usually glass cups but can be anything, they are placed on the skin mostly on the back or head and the air pressure released!

After a bit of time, the cups are removed, and bruises remain. Thats it. Various aliments are said to have been cured or treated, all of which are completely unproven and there are no peer reviewed studies or clinical trials on cupping at all that will heel or help with any ailments the treatment is supposed to cure!

Cupping comes in a number of forms. Fire cupping, where a cup (most often a glass bulb) is heated with a flame then pressed onto the person’s back; as the hot air inside cools, the suction inside pulls blood to the surface and creates a bruise. Some cups have a valve to connect a suction pump. Wet cupping involves first making an incision, so the suction then causes fairly heavy bleeding in to the cup, and so it’s basically a form of blood letting.  In all honesty if you are going to be removing this much blood why not donate it and give blood for a good cause, not pseudoscience!

Just because something is old, doesn’t mean its good

You will see many people saying its an ancient Chinese way of healing or even Egyptian, the reason almost any alternative treatments revert back to this claim is because its old, it must be good, unfortunately something being old does not validate any claim! But for those who remain convinced that the value of cupping lies in its great antiquity, then it is considerably less valuable than they’ve been led to believe.

Alternative medicine practitioners and acupuncturists who sell cupping today also lack a coherent description of its utility and we come right back to the bullshit detoxification fad, claiming that the suction will remove nonspecific “toxins” from the body, I’m not actually sure how low pressure and bruising would cause us to secrete toxins, if anything it will produce sweat, which is what is supposed to happen, we humans don’t have toxin glands, we cant “release toxins” though our skin so

Massage is a proven treatment for many things

There is one very good reason cupping’s popularity has grown despite its complete lack of any medical evidence. Basically when you get cupping done it is accompanied with a massage, sometimes before and after the cupping has taken place. Massage is extremely relaxing, It feels fantastic and has been proven to treat many things such stress and anxiety and also muscle aches or other muscle related injuries, unlike cupping massage actually has a mechanism which it provides relief.

We have studies and samples of muscle tissue both before and after tissue-damaging exercise, and compared these muscles that had a therapeutic massage with muscles that did not. The tested results showed that massage significantly improves the healing of muscle tissue.

it was thought that lactic acid build up was reduced by the physical action of massage, but there isn’t much evidence of that, but what they did find is that massage both reduces tissue inflammation and promotes cell regrowth.

So taking in to account the relaxation benefits a massage has, and with it being a fairly pleasurable and genuinely healthful experience, its not surprising that people will associate this “healing” or the feeling they get with the cupping, when in reality you only really needed the massage, just because cupping is a trendy thing to do and has some ancient roots, doesn’t mean it has any benefits, it’s a fashion statement and looks good on social media, nothing more! If you want to show of your bruises and look fashionable and you have money to waste, then go for it, but if you see anyone claiming magical cures or super healing, then these people are either totally ignorant or trying to make money out of you.

But it remains important not to confuse massage relief with alleged beneficial effects of cupping.